About Us » James Curran 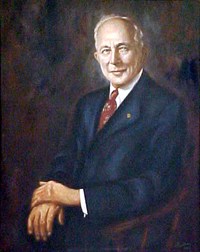 James Curran
One of the pioneers of Bakersfield, James Curran was born in New York in 1862 and spent his boyhood in Dixon, IL. He came to San Francisco in 1881 and visited many Southern California towns in search of work. He came to Bakersfield when it was a town of 700 people. Bakersfield's climate was to his liking because he immediately recovered from a severe asthmatic condition.

Curran's first job here was in general ranch work with Haggin and Carr, founders of the Kern County Land Co. He remained with this organization until he founded his own business, Bakersfield Sandstone and Brick in 1886. The pioneer organized the firm and through the years saw it expand from brick manufacturing to a general retail line in building materials and supplies. The business was incorporated as the Sandstone Brick Co. in 1903 and is under the direction of his sons.

He married Mary Gardner Swain in 1887 at a wedding held at the Rosedale Ranch of the Kern County Land Company.

Curran was active in business and community development since 1883. He was elected justice of the peace of Bakersfield Township in 1886 and was one of three organizers of Kern City, which he served as its first treasurer.

Curran was appointed a member of the Exemption Board under the United States Draft Act serving during World War I. He also served as a member of Kern County water committees and was foreman of several grand juries. He was one of the organizers of the Kern County Board of Trade, which became the Kern County Chamber of Commerce and later the Board of Trade. Curran continued as the head of the firm he founded until his death in 1952 at the age of 90.

The doors of the James Curran Junior High School, which was named in his honor, opened to students for the first day of school Sept. 6, 1960.